Smartphones run the world we live in today. If you are thinking about upgrading your old smartphone, it is the perfect time to get trade in the old for the new. BusinessInsider displays the best ranked smartphones in the world. 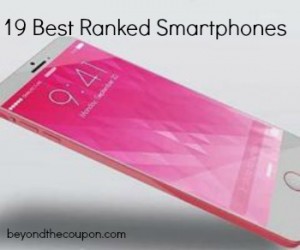 With the best ranked list containing new devices that phone makers have recently introduced, as well as some older models that still out perform the competitors. The Best ranked smartphone list is based on multiple qualities of a phone including design, software and hardware features, content selection, carrier availability, and price.

Most smartphones are available at retailers such as Target and Walmart, where discounted gift cards can be purchase to decrease the phone price by up to 4%. Check out online websites such as giftcardrescue.com to find a discounted card for your favorite retailer or save money by shopping online. If you’re still married to the idea of a physical keyboard on your phone, then BlackBerry’s Q10 is the first (and only) phone you should consider buying.

The downside: BlackBerry doesn’t have a good app selection. If you need a workable phone that costs next to nothing, the Moto E from Motorola is a great choice.

This trimmed down Android smartphone doesn’t have a super sharp screen or connect to 4G networks, but it does come dirt-cheap. You can buy it without a contract for just $129. LG released the first-ever curved-screen phone, the G Flex, in the U.S. this year. The G Flex has a large, 6-inch curved screen and a self-healing backing that can repair minor scratches.

Unfortunately, LG had to make a few compromises to get that curved screen on the device. The resolution is a lot lower than it is on Apple and Samsung phones, so images, text, and video look grainy in comparison. LG’s user interface for Android is also unattractive and buggy. The G2 is LG’s current flagship phone. It has a gorgeous 5-inch display, one of the best you can get on a smartphone. But it does have one odd design quirk: the power and volume buttons are located on the back of the phone, making it a bit awkward to use at first.

Warning: LG recently announced its newest flagship, the G3. It goes on sale in August. If you like LG phones, you might want to wait until then. The HTC One Max is the company’s first phablet. It has a giant 5.9-inch screen and a fingerprint sensor that can unlock the phone and launch apps.

It’s an attractive device made out of metal, but all that metal also makes it extremely thick and heavy compared to most phones that size. It’s the prettiest phablet you can buy, but not the best. Samsung’s flagship phone from last year may have been replaced by the new Galaxy S5, but it’s still a decent option if you’re looking for a big-screen device at a nice discount.

The Galaxy S4 isn’t the best smartphone, but it’s good enough if you don’t want to spend a lot. The iPhone 5C, which launched at the same time as the iPhone 5S, is Apple’s slightly cheaper model of the iPhone. It has almost all the same specs and features as the iPhone 5 that launched in 2012, but wrapped in a variety of colorful plastic cases. You can get it in blue, pink, green, yellow or white. HTC’s flagship phone from last year, the One, still holds up very well today. The One is one of the most beautiful smartphones ever made. It also has a nice camera and large, 4.7-inch screen. Now that the new One flagship phone is out, you can get the original at a nice discount on some carriers.

If you’re on Verizon and want a Windows phone, the Nokia Lumia Icon is pretty much your only option. It’s not the most attractive device, but it is well-constructed and has an amazing camera. Most consider the Nokia Lumia 1020 to be the best Windows phone you can buy. It has one of the best cameras you can get in a smartphone, which is nice if you don’t mind the giant bulge it adds to the back.

Other than that, it’s mostly the same Windows Phone experience you get on any other device. The Lumia 1520 is the first Windows Phone phablet ever made. It has a huge 6-inch screen, which gives you extra room for more apps and Live Tiles on your home screen. If you’re accident prone, then Sony’s new Xperia Z1S might be a good choice for you. The Android device is virtually waterproof, and it can survive under 5 feet of water for up to 30 minutes. The Galaxy Note 3 has the biggest screen yet, 5.7 inches, yet its body is actually thinner and lighter than the last model. It also comes with a special stylus called the S Pen for drawing or taking notes. It’s the best phablet you can buy.

Fair warning: Samsung is expected to release its new Galaxy Note in September. The Moto X is one of the best Android phones. Motorola added some new features to Android, like the ability to check notifications easily from the home screen and launch the camera app by twisting the phone. But it’s still mostly the “clean” version Android from Google. Google’s latest flagship phone is the Nexus 5, which was made in partnership with LG.

Like all of Google’s Nexus devices, the Nexus 5 runs a pure version of Android, meaning you won’t find any modifications to the software. It also gets software updates much faster than other Android phones. But perhaps the best part is the value. You can get the Nexus 5 unlocked for about half the price as other top-tier smartphones.

The only downside: the camera isn’t that great. Samsung’s newest flagship phone, the Galaxy S5, is a nice improvement over last year’s phone. Instead of weighing the device down with a bunch of unnecessary features, Samsung focused on improving the stuff people care about the most. The Galaxy S5 has the best screen (5.1 inches) ever made for a smartphone. The camera is really good, too.

But if you don’t like phones made out of plastic, you should probably look for something else. HTC’s latest flagship phone, the HTC One (M8), is the best Android phone you can buy.

Like the original, the new HTC One, which is also called the M8, has a gorgeous design and high-quality metal construction. It also has an extra rear camera that acts as a depth sensor so you can edit photos later and change the focus. HTC partnered with Google to create a version of the HTC One (M8) that runs a clean version of Android. That means you don’t get any of the extras that come with the regular version you buy through carriers. You also get software updates directly from Google shortly after they’re ready.

If you want a great phone with the best possible Android experience, this is the device to buy. For most people, the iPhone 5S is the best smartphone available.

It strikes the perfect balance of great design, useful features, and app and content selection. The iPhone 5S looks nearly identical to last year’s iPhone 5, but sports a better camera and a fingerprint sensor for unlocking the phone without a passcode.