Purchasing the latest tech toys isn’t cheap. With the help of companies such as giftcardrescue, you are able to purchase discounted gift cards to stores such as Target that will help you Here’s how to soften the blow to your wallet. 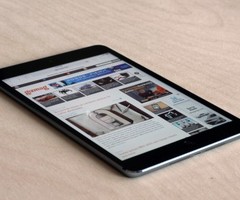 1. Sell your old device. Before upgrading to a new smartphone, laptop or tablet, consider selling or trading in your old device. Many retailers and wireless carriers offer trade-in programs. “The more current the phone or gadget, the more credit you can expect to receive,” consumer and money-saving expert Andrea Woroch says.

While retailers typically offer a gift card toward future purchases, trade-in websites including Gazelle, BuyMyTronics and Glyde offer cash. “Some sites will buy it from you even if it’s broke, though naturally you’ll get a lower buyback,” says DealNews.com spokesman Mark LoCastro. “That’s money that you can in turn use for your new gadget purchase.” You may get more money reselling the device yourself through eBay (EBAY) or Craigslist, but that option also requires more legwork to complete the transaction and more potential for the buyer to flake out or defraud you.

2. Know your needs. According to Stephanie Humphrey, weekly tech columnist for Ebony.com and founder of the blog A Matter of Life and Tech, it’s a good idea to determine how much storage space and what features you need before a shopping excursion. That way a slick salesperson won’t upsell you to a model that has extra bells and whistles you won’t use. Customers sometimes “go in and say, ‘Gimme that one,’ and it’s more expensive than what [they] need,” she says.

With most non-Apple products, you can usually add more disk space later if needed, although it’s often cheaper to buy the right amount from the start. If you must upgrade your disk space later on, Humphrey says you can save money if you buy the component pieces online and install them yourself.

3. Consider buying the previous generation. iPhone 5s may be popular among the tech cognoscenti, but if you’re price-conscious, consider an iPhone 4 or 5 (not 5s). “Electronics have one of the fastest depreciation values on any consumer good as manufacturers and brands release new updates and models on popular gadgets every few months,” Woroch says. “What’s hot today may be old news in a few months, so it’s not worth paying a premium just to get the latest bells and whistles.”

LoCastro adds that a previous generation device is often still capable of running the latest apps and software. “You might just sacrifice a faster processor or thinner design,” he says.

Timing your purchase to the release of a new model can also save you money. “The best time to buy a current-generation iPad is toward the end of its life cycle,” LoCastro says. “So the minute you hear rumors that a new iPad is in the works, chances are retailers will discount the current iPad. That rule generally applies to all types of gadgets, from smartphones to tablets.”

4. Look for open-box deals or refurbished devices. Many retailers sell open-box items at a steep discount. “Open box may just mean it was the display model, or [an employee] may have opened it to show someone and that person decided not to purchase that item,” Humphrey says.

Refurbished devices have typically been used and returned to the manufacturer, which usually restores it to factory settings and tests it for defects. Humphrey says it’s a good idea to buy refurbished products from a reputable source, and make sure it’s factory certified.

5. Exercise caution on secondary markets. Worldwide sales of smartphones to end users totaled 968 million units, and tablet sales reached 195.4 million units last year, according to Gartner (IT), a technology research and advisory company. Plenty of these functional devices wind up on the secondary market when the owner gets tired of them or decides to upgrade.

Craigslist and eBay are two popular sources for used devices, but they can be riskier than buying directly from a retailer or manufacturer. Humphrey likes that eBay displays reviews from previous buyers. “You want sellers that have a lot of ratings so you can get a feel for how many people have walked away satisfied,” she says. Just be cautious about what you read. “There’s a whole industry now around buying fake reviews,” Humphrey points out. Craigslist connects local buyers and sellers, allowing them to meet in person to test a device. “The only real way to know if a product is going to function is to power it up,” she adds. If you’re conducting a Craigslist transaction in a public place for safety reasons, you can easily test out a smartphone or laptop, but trying out a TV or other large device becomes trickier.

6. Skip the extended warranty (most of the time). Retailers make much of their money from selling extended warranties, not from the products themselves. Your credit card may automatically offer protection beyond a standard manufacturer warranty for some items, so it’s worth checking before you pay for an extended warranty. Also consider the type of gadget you’re buying. “When it comes to televisions, you’re usually safe to skip over this added expense,” Woroch says. “While warranties do offer peace of mind, HDTVs are surprisingly reliable.” Humphrey says you probably don’t need an extended warranty on a TV, but it might be worthwhile for a laptop or tablet. “You’re transporting those, so there’s more of a chance that you’ll drop it or scratch it,” she explains. Still, the manufacturer warranty may not cover accidental damage such as water damage, so read the fine print before you buy.